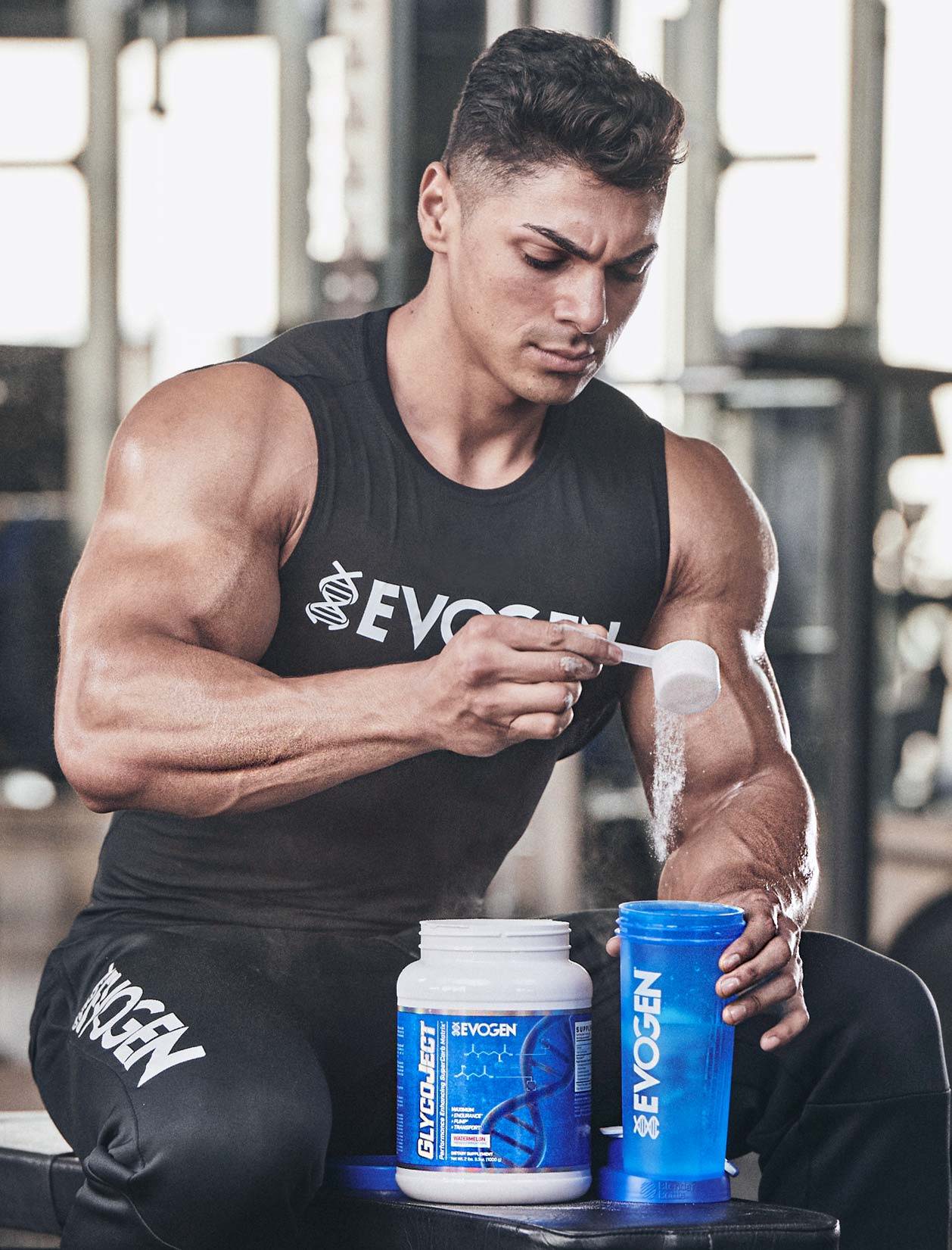 Glycogen is the primary nutrient fuel source for working muscles. It is depleted quickly during intense training, causing a dramatic decline in ongoing optimal athletic performance. The hyper-volumizing, nutrient delivery complex in GlycoJect is specifically designed to accelerate the uptake of glycogen and muscle-building nutrients into muscle cells to enhance performance and fuel maximum growth and recovery.

GlycoJect is a precisely formulated hyper-volumizing nutrient driving complex, designed to hyper-load muscles with performance-fueling glycogen while simultaneously “injecting” muscle-building nutrients into muscle cells. GlycoJect is an integrated complex that contains a patent-pending carbohydrate (Karbolyn® Homopolysaccharide) designed to pass rapidly through the stomach into the bloodstream where it is shuttled directly into muscle cells.

What Does GlycoJect Do?

How Does GlycoJect Work?

GlycoJect’s customized carb component has been has been shown to absorb up to 80% faster than dextrose, maltodextrin, waxy maize or other “fast-absorbing” carbohydrate sources—even faster than plain old pasta, rice or breads. The rapid transport of this unique polysaccharide acts like a pump, driving water, carbs and nutrients into the muscles. To facilitate this glycogen and nutrient “injection” effect, GlycoJect’s Hyper-Volumizing Rapid Absorption Proprietary Complex harnesses the natural power of this customized carb combined with nitric oxide and insulinogenics to accelerate the uptake of nutrients into muscles.

Who Will Benefit from GlycoJect?

How Do I Use GlycoJect?

GlycoJect is designed to be used before, during, and immediately after training, to help maximize endurance, pump, and nutrient transport.

Pre-Workout: If taking Pre-Workout, drink 1 scoop about 30 minutes prior to physical activity to ensure maximum endurance, performance and volumization.

1. Cyclists and endurance athletes should begin the “loading” process the night before a big race or event. Use 1-2 scoops of GlycoJect mixed in 8-10 oz. cold water, in between meals, up to 6 hours before bedtime. The morning of the race, fuel up with 1-2 scoops for maximum endurance and performance.

2. MMA athletes, fighters and wrestlers should use GlycoJect to rehydrate and pre-load muscles prior to fight night, by consuming 1-2 scoops GlycoJect with 10-12 oz. water, immediately after weigh-ins; sip on GlycoJect during warm ups and up to 45 minutes before fight time.

3. Bodybuilders should use GlycoJect during the “pump up”, about 15 minutes before stepping on stage, to drive carbohydrates into muscles, and pull water from the skin, “chasing the carbs” into muscles, for dramatic roundness, fullness and tight-skinned muscle swell. Mix Glycoject with 4-6 oz. cold water, sip during pump up, then slam the remainder just before hitting the stage.

For extreme results, stack GlycoJect with EVP™, Evogen’s Elite Pre-Workout Solution prior to training; and stack with Cell K.E.M.™, Evogen’s Elite Mass & Recovery Catalyst, during and/or after training.


KEEP OUT OF REACH OF CHILDREN