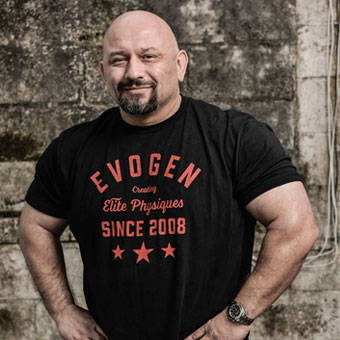 When Rambod is not busy coaching many of the world’s elite, he serves as the CEO of Evogen Nutrition. Putting his Bachelors degree in Biology with an emphasis on Neurophysiology to good use, Evogen Nutrition has been experiencing rapidly growing popularity.

All of its formulations were created for Rambod’s elite athlete roster, and only in the past few years have they been made available to the public. Rambod prides himself on bringing only quality innovations to his customers around the world. The formulations within the Evogen Nutrition supplement line are crucial to the success of any FST-7 program because of their effect on growth, repair, and muscle volume.

The Origin of Evogen Nutrition

It used to be that only a select athlete clientele had access to the ultra-exclusive, custom nutritional supplement formulas developed by Hany. As He turned out winner after winner at national level and professional bodybuilding contests, people began to notice that all of these champions had something in common: In an addition to being bone-dry shredded; they were all big, full and round.

Many possessed roundness and fullness only rivaled by bodybuilding legends. An underground buzz began about some of the formulas Hany was using with his athletes. Although many of the components were accessible, results were limited for several reasons: One, the athlete was forced to combine several different products which also had antagonistic ingredients, fillers, and sugar in an attempt to replicate the formula. Two, nobody knew the correct ratios of ingredients necessary to achieve the desired effect. Three, the premium quality, ultra soluble, bio available, versions of the key ingredients were not yet commercially available to the public. Evogen had no choice but to fill the void by responding to the incredible demand in the marketplace.

When you purchase an Evogen product, you can be absolutely confident that it was developed by an athlete, for athletes. Hany began competing in Natural Bodybuilding as a teenager, and continued his amateur bodybuilding career through his time at UCSB; allowing him to put his classroom learning into practical use in the gym, the field, and on the stage.